Tired of the watching the same formula flicks over and over again?  Looking for something more offbeat, quirky, and fun to surprise guests for a night at the movies?  With cinema, there’s a century of brilliance to choose from, and most of it lies beyond the radar of the Hollywood production machine.  Certain films over the years have become indelible cult favorites, gathering an audience on the strength of their unusual storylines and colorful characters, rather than big-budget special effects.  If you’re looking for a great way to add some spice to your summer movie viewing, here’s five recommendations for films that will be sure to fit the bill: 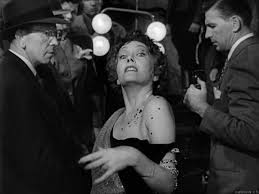 SUNSET BOULEVARD, 1950.  The original proto-goth cult classic follows the exploits of a young writer who is inadvertently sucked into the world of a fading silent-screen actress who refuses to let him go.  This darkly comic Billy Wilder masterpiece is full of iconic scenes and eminently quotable lines, and although over 60 years old, its portrait of the seedy underbelly of Hollywood glamour is as prescient today as it was during the Golden Age of cinema.  Sunset Boulevard is a film which rewards repeat viewings and is frequently ranked in critic’s lists among the all-time greatest films ever made.

ZARDOZ, 1974.  This little-known Sean Connery film has inspired a zealous cult fanbase that has taken to its far-out sci-fi premise, post-psychedelic visual scheme, and Monty Python-esque touches of humor.   The beguiling story takes place in a future world where a segment of humanity has walled itself off from the rest, which has degenerated into brutality.  One of the brutals finds his way into the hi-tech, psychically advanced world of the Eternals and a kaleidoscope of visually stunning setpieces ensues.  The sight of Connery running around in what looks like a giant red diaper is worth the price of admission, alone! 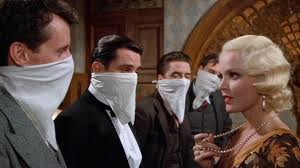 ONCE UPON A TIME IN AMERICA, 1983.  Sergio Leone’s attempt to outdo The Godfather actually does outstrip its inspiration in many ways.  Robert DeNiro and James Woods give stunning performances as two gangsters who grow up from childhood in the streets of New York City, forming a bond together that is eventually broken through betrayal.  This lavish epic, filled with incredible cinematography, was tragically cut to under two hours for its original theatrical release, where it performed poorly at the box office.  Only when the nearly four-hour director’s cut was released to video was the true splendor of this sensitive and heartfelt (yet action-packed) mobster epic fully revealed.  Don’t let the extreme length fool you–this film is worth every second and will pass by in no time. 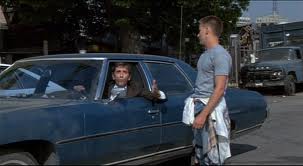 REPO MAN, 1984.  One of the ultimate cult films stars a young Emilio Estevez as a young punk recruited into the strange world of car repossession.  The exploits and adventures which ensue are bound together by a mysterious glowing car trunk, an idea which Quentin Tarantino shamelessly borrowed for his own cult classic Pulp Fiction.  It’s a hoot from start to finish, a wild ride through the streets of LA that combines humor and action with plenty of requisite cult weirdness.

PULP FICTION, 1994.  A cult film that became so famous it crossed over to mainstream success, Pulp Fiction is an homage to the whole idea of the cult film itself, from its Repo Man reference on down.  The movie relies on quotable dialogue and intertwining storylines to weave a dense and bizarre tapestry of life in LA that expands on earlier flicks about the city, while adding in the postmodern touches that Tarantino is so famous for.  The soundtrack alone–a feast of 70s funk and soul classics–will brighten any night at the movies.  This film was designed with the idea that people would be dancing to the twist and talking about the French quarter pounder with cheese for decades to come.  See if you can spot all of the dozens of film references peppered throughout, without resorting to Wikipedia first!