Valentines Day is a perfect occasion for theater romance.   In this article, we will take a closer look at the films which can make this special occasion a truly memorable one.  First, it’s always important to set the scene: a little mood lighting, lit candles, and tastefully arranged flower decorations will keep things appropriate (for Valentines Day, you don’t want to stray too far from the tried and true, and besides, these simple touches work every time).  Of course, you will want to relax in an appropriate loveseat configuration; if you have a partner to share your home theater with, this feature is a must for any night you want to spend alone together, let alone Valentine’s Day.  Once you’ve taken care of these necessities, the essential question remains: what to watch?  A special night deserves a special selection of films, that will spark the kind of romance you’re looking for while including something of interest for both sexes.  The five films presented below are recognized classics from the golden era of cinema right through the present day, which are sure to entrance:

1. NINOTCHKA (1939): For those looking for a real touch of romantic class from the Golden Age of cinema, you need look no further than this Greta Garbo vehicle from the initial years of the Cold War.  Garbo plays a Russian envoy sent to Paris, who ends up falling in love with a Count and is soon torn between loyalty to the Soviet Union, and a newfound love of the West.  The film is a comedy, but with a sophisticated political undercurrent that keeps the dialogue sharp and interesting–you’ll never feel dumbed down, as you might in watching a modern-day romantic comedy.  The chemistry between the two leads was so good that the American Film Institute actually ranked Ninotchka #52 in its “100 Years, 100 Laughs” list of the greatest comedies of all time. 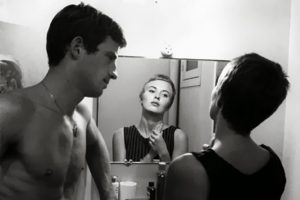 2. BREATHLESS (1960): The art-crowd will never go wrong with this, Jean-Luc Godard’s first feature-length film and the opening salvo of the French New Wave.  Unanimously hailed as one of the greatest films ever made, this simple story of an American girl who is seduced by a French man on the run for murder, is told with an urban sense of ennui which nonetheless packs quite a romantic punch (leave it to the French).  Without giving too much away, the final climactic scene is one of the most hallowed in all of film history–don’t expect a happy, sentimental ending, but do expect a complex and beguiling meditation on the relation between love, loyalty, and loss.  Godard’s editing style was revolutionary for its time and while modern audiences will have become accustomed to its jump cuts, they still give the film a stylish postmodern edge.

3. BREAKFAST AT TIFFANY’S (1961):  Audrey Hepburn shines as Holly Golightly in this unforgettable film, which details the rocky romance between a wealthy Manhattan socialite and an out-of-luck writer, which goes through several intriguing twists and turns.  Although the film is over a half-century old, it has a timeless quality which continues to appeal to both genders, and would be notable for Hepburn’s performance alone.  It still appears on many critic’s “best-of” lists, and is a perennial favorite at Valentine’s Day. 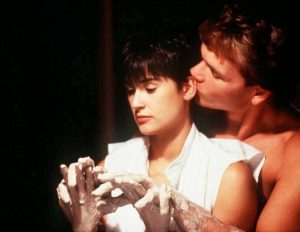 4. GHOST (1990): This film, still famous for its over-the-top-but-we-love-it-anyway pottery making scene, is actually a pretty seamless blend of comedy and drama, with plenty of passion to spare.  Whoopi Goldberg won the Academy Award for her supporting role, as the psychic who is able to see and hear the ghost of her neighbor’s deceased lover.  It’s a little corny in spots, and an undeniable tearjerker, but it manages to stay endearing–and then there’s that pottery scene.  Even if you’ve seen it before, years ago, Valentine’s Day is the perfect chance to give this one another look. 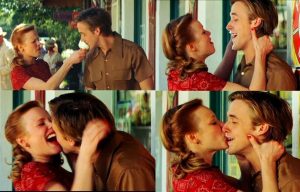 5. THE NOTEBOOK (2004): Although it received a mixed critical reception upon release, this historical romance set during the WWII era shot Ryan Gosling to stardom, and has become a cult favorite in the years since.  It now frequently appears on lists of the most romantic films ever made, as the chemistry between its two leads is undeniable.  It’s also one of the few relatively recent films to have made the leap to romantic classic, and so if you and your partner aren’t in the mood for a golden oldie, The Notebook is a perfect modern replacement.