A few days ago we looked back at the Star Wars franchise, the first in a planned series of articles that will review several other very famous movie brands.  When the 50th anniversary of the James Bond saga reared its head in 2012, MGM celebrated by releasing Skyfall, which garnered some of the best critical praise in the entire history of the franchise.  The commercial and critical success of the film naturally led to a new sequel now in pre-production, slated for a 2015 release (the same year, incidentally, that Star Wars: Episode VII is scheduled to drop).  As we look back at the half-century of 007 highs and lows–24 films total–it is prescient to note that the James Bond films often make outstanding home theater fare, with their exotic foreign locales and noisy, high-powered action sequences.  And who can forget the endless succession of sultry Bond girls?  So, sit back in your theater chair and enjoy these classics: 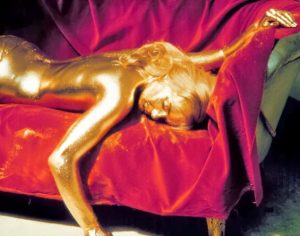 GOLDFINGER, 1964: The third James Bond film is often considered the very peak of the series, never to be matched again.  It introduces the series’ most memorable arch-villain, the man of the film’s title, who asphyxiates his victims by painting them gold.  Besides Goldfinger himself, the film is also notable for having what is arguably the most memorable henchman, Oddjob, whose hats can kill.  The script was also surprisingly risque for 1964, as its primary Bond girl goes under the saucy alias Pussy Galore.  Goldfinger is a tight, gritty, suspenseful film that has not dated in the least, and stars what is still the definitive Bond: Sean Connery.

ON HER MAJESTY’S SECRET SERVICE, 1969: George Lazenby was only James Bond for one film, which did relatively poorly at the box office; however, fans of the series consider it one of the very best, rivaling Goldfinger. Lazenby had neither the looks or charm of Connery, but he brought a rugged aspect to the character.  It’s really the plot and action sequences which mark this film, however, as well as the finest turn of another of the series’ quintessential villains, Ernst Blofeld. 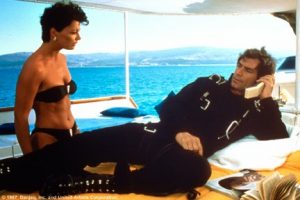 THE LIVING DAYLIGHTS, 1987: although its KGB/Cold War plot is somewhat dated now, this debut in the role for Timothy Dalton was one of the best Bond films in years.  It returns to the somewhat grittier, streamlined feel of the early Connery era, focusing on action and suspense rather than enormous, gaudy setpieces and cartoon villains.  And while the KGB is no more, the spy world hasn’t changed much.

TOMORROW NEVER DIES, 1997: Pierce Brosnan enjoyed a lengthy run of films as the lead character, and while 1995’s Goldeneye received better reviews, this film is my pick of the litter.  Once again, the plot focuses on real-world troubles–tension between the United States and China–which allows for some breathtakingly beautiful Asian locales, and a surprisingly intelligent Bond girl, Wai Lin, who proves a capable equal to the man himself. 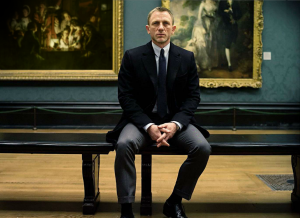 SKYFALL, 2012:  The newest Bond, Daniel Craig, has re-energized the franchise.  The last three Bond films with his lead are also the most packed with the latest audiovisual delights for home theater enthusiasts, and Skyfall is the most elaborate of these; the DVD/Blu-Ray editions are state-of-the-art in their quality and extras.  However, it was the plot and characterization of this film which enthralled critics, who applauded the look into Bond’s early childhood, as well as the psychologically complex villain Silva.  These elements are deftly inserted into the film without bogging it down into over-seriousness, or eclipsing the action sequences which remain as riveting as ever. 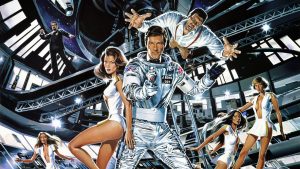 ANY ROGER MOORE FILM, 1973-1985: I know this sounds a bit harsh, but let’s face it–Moore’s endless reign as Bond almost spelled the death of the franchise.  Even the best films of his tenure, The Spy Who Loved Me (1977) and For Your Eyes Only (1981), while praised at the time, look dated now.  The worst films–most infamously, the Bond-In-Space frolic Moonraker (1979)–rise to unbelievable levels of camp (blame Star Wars), although they might be fun if one approaches them in that vein. Moore himself was a very workmanlike Bond–not awful, but not especially dashing or debonaire, and the action sequences almost always fail to ignite (one need only peek at the obligatory 70s car chase scenes in Live And Let Die (1973) for an instant insomnia cure–although the film has a great theme song).  If one has to choose a Moore film to see, it’s probably The Spy Who Loved Me, thanks largely to the chemistry that Bond girl Barbara Bach brought to her role.  But why bother, when Goldfinger and Skyfall are so much better?