The history of science fiction on film is rich and varied, stretching back from the silent era and on to today’s mega-blockbusters.  The genre has always been snubbed by the Oscars, winning awards mostly in technical categories like visual effects and sound editing, although many critics place a number of science fiction films in their lists of the greatest films ever made.  Sci-fi has also proved wildly popular with audiences, and the stereotype that it is only liked by nerds in their mother’s basement is unfounded, as people of every age, sex, and social standing make these films big business at the box office. This article is part one of a series which will attempt to trace the development of science fiction on film; this first installment begins with Fritz Lang’s still-epic Metropolis and ends with the breakthrough of 2001: A Space Odyssey, which heralded a new kind of science fiction cinema.  Just remember–sci-fi, whether old or new, always looks great in a home theater!  No genre’s sights and sounds are better equipped for big-screen thrills. 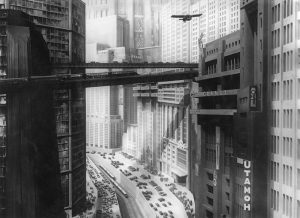 1. METROPOLIS, 1927.  The first truly eye-popping sci-fi film was Fritz Lang’s vision of a futuristic dystopia where workers service the ruling classes.  The film is notable for special effects which still look absolutely epic on-screen, most notably the future metropolis itself with its towering skyscrapers.  There’s plenty more with which to feast one’s eyes, including the famous robot creation scene with its electrifying bolts of lighting, a gargantuan factory flood, and thousands of extras everywhere you look.  The film is also notable for its sharp social commentary, still relevant today. Although it’s a silent film, it’s an absolute must-see and will not bore modern audiences. 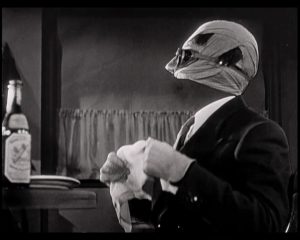 2. THE INVISIBLE MAN, 1933.  Based on the HG Wells novel, The Invisible Man was one of a slew of classic horror films that came out in the early days of the silent era, including Dracula and Frankenstein; this film turned out to be among the very best, thanks to superb acting and direction.  The story of a scientist who discovers the secret of invisibility and is slowly driven mad, is convincingly portrayed through a series of slow, measured transformations. 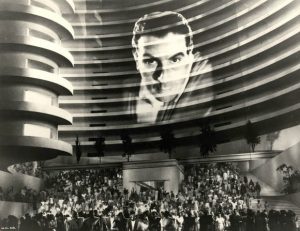 3. THINGS TO COME, 1936.  Another Wells novel provided the inspiration for this screen adaptation, which is considered one of the greatest science fiction films ever made.  Wells himself wrote the script, which covers mankind’s history from 1940 to 2054; watch for its astonishing prediction of the outbreak of WWII, including the bombing of England.  The film then moves far into the future, moving through periods of darkness and technological development, with visual effects that were state-of-the-art for their day. Definitely recommended. 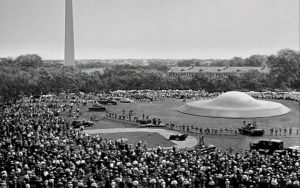 4. THE DAY THE EARTH STOOD STILL, 1951. A dearth of science fiction films in the 1940s was followed by an onslaught in the 1950s, a post-Roswell era when people seemed to see UFOs everywhere they turned.  Most sci-fi of the period was of the exploitative Z-movie type (Plan 9 From Outer Space being only the most infamous), but in the midst of all that came this undeniable classic, which was remade (rather poorly) a few years back.  A staunchly moral film about fear, prejudice, and peace, its central character–the alien Klaatu–has become iconic. 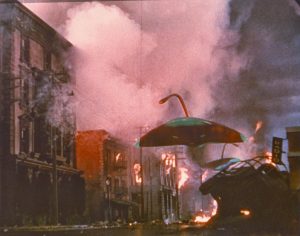 5. WAR OF THE WORLDS, 1953. HG Wells continued to provide much fodder for classic sci-fi during this period, and his story of the invasion of Earth by a fleet of Martian UFOs fit the tenor of the times as much as The Invisible Man‘s monster ethos plugged in to 30s fads. This film, one of the first sci-fi epics to be filmed in color, also predicted much of the action-oriented battle aesthetic of the post-Star Wars blockbuster era.  So it made sense that Steven Spielberg directed a popular remake in 2005–but be sure and catch the still-watchable original. 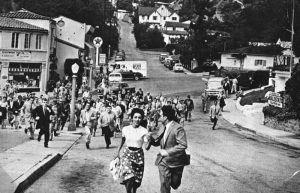 6. INVASION OF THE BODY SNATCHERS, 1956.  Although a product of the Z-movie craze of the era, Body Snatchers quickly rose above the crowd as much for its heart-pounding suspense, as its prescient commentary on McCarthyist paranoia.  One of the most frightening films of all time, it plays on some of our darkest fears, and does so in a pitch-perfect manner throughout.  This extremely low-budget film also proves that one does not need gigantic set-pieces or fancy visual effects, to produce ace sci-fi.   A credible remake was made with Leonard Nimoy in 1978.

7. FORBIDDEN PLANET, 1956.  On the other hand, gigantic set pieces and fancy visual effects lend much of the splendor to this epic film, which can even still impress audiences today who are used to much more technologically sophisticated fare.  The plot of the movie, which involves a band of space explorers in the 23rd century, would provide Gene Roddenberry with the inspiration for Star Trek a decade or so later. Besides boasting the most elaborate production values of its day, many of the film’s ideas like “thought-projection machines” also seem far ahead of their time. Besides, it’s got Robby The Robot in it. 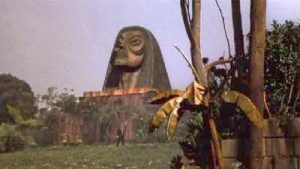 8. THE TIME MACHINE, 1960. Yet another HG Wells adaptation, this look into mankind’s far, far distant future featured groundbreaking effects for its day.  The tale of a society where humans are slaves ruled over by the dreaded “Morlocks”–a twisted evolution of mankind prompted by a nuclear holocaust–contains messages of revolution and freedom, but is mostly just plain-old popcorn fun. 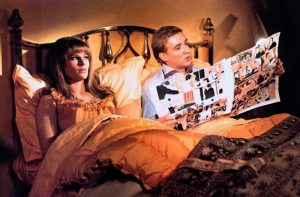 9. FAHRENHEIT 451, 1966. An adaptation of the Ray Bradbury classic, this film was given an arty sheen by French New Wave director Francois Truffaut.  Its view of a future where books are banned leads to a philosophical debate on the merits of knowledge; the lack of the usual action setpieces common to sci-fi make this one of the most cerebral in the genre.  Excellent acting and direction keep the film from looking dated.

10. FIVE MILLION YEARS TO EARTH, 1967.  This film, known as Quartermass And The Pit in Britain, was the third in a series of Quartermass films produced by the famous Hammer studio. It’s a crackling thriller involving the discovery of a Martian artifact deep underground in the center of London, which unleashes a signal that causes triggers in the human subconscious. Its theory of aliens having guided and developed human development here on Earth would foreshadow 2001, as well as various real-life alien conspiracy theories (David Icke and his kind) that make the rounds today! 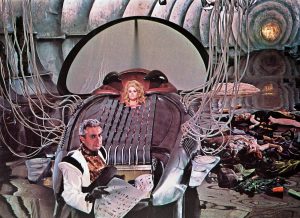 11. BARBARELLA, 1968.  This very 1960s fantasia stars a young Jane Fonda in the role that initially made her famous.  It’s an intentionally campy, humorous, and very psychedelic cult classic based on the French comic, in which a sexy space traveler is assigned to a strange planet to retrieve a deranged scientist. Her adventures are truly bizarre, as only those LSD-riddled times could conjure; look out for Anita Pallenberg’s superb performance as one of the villains.  Fun fact: the rock group Duran Duran got its name from the scientist in the film.

12. 2001: A SPACE ODYSSEY, 1968. Stanley Kubrick’s adaptation of the Arthur C. Clarke short story “The Sentinel”, with script contributions from Clarke himself, turned the science fiction world on its head when released in 1968.  The film matched an intensely intellectual plot with visual effects that represented a quantum leap in the art of filmmaking. Everything about 2001 was memorable: its unique four-part structure, its shot of a bone turning into a spacecraft, the lovably errant computer HAL, the dazzling Jupiter Corridor sequence which blew stoner minds, and the highly enigmatic ending that kept audiences guessing for years.  Universally recognized as one of the greatest films of all time, 2001 seemed to bring sci-fi a new level of respect as a serious artistic form–although if you’ve seen any of the previous films on this list, you know that it had existed that way for quite some time previously.