Last Sunday, the Golden Globes presented the Cecil B. DeMille award for lifetime achievement to Woody Allen, one of America’s most iconic and beloved film directors.  Since 1969 he has written and directed over 40 films, including several which regularly appear on critic’s lists of the greatest movies ever made.  His latest, Blue Jasmine, has received wild acclaim, including near-unanimous award wins for actress Cate Blanchett in her jaw-dropping lead performance. Allen has been making films like these for nearly half a century, so we here at 4seating pick his ten finest for a prospective comedy night in your home theater.  It’s almost impossible to rank them, so these will be presented in chronological order: 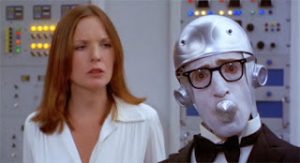 1. THE SLEEPER, 1973: This absurd sci-fi farce belongs to the era of Allen’s “early, funny movies”.  It’s the first film he directed which starred Diane Keaton, who became as much of a fixture of his greatest films as Allen himself. Basically, a man who was cryogenically frozen in the year 1973, wakes up 200 years later in a dystopian society.  Our hero leads the revolution, all while dressed as an orgasm-addicted robot (?!). There’s enough slapstick humor, one-liners, and hysterical send-ups of sci-fi cliches to fill ten movies.

2. ANNIE HALL, 1977: This film–almost unanimously regarded as Allen’s best, and as one of the greatest films ever made–marked a turning point for the director from comedic farce into a more serious, nuanced form of romantic comedy.  Diane Keaton’s title character is among the most memorable female romantic roles ever, in a truly multi-faceted peformance that was highlighted by her daring fashion choices.  It’s still the ultimate date night film, a brilliant mix of silliness, intellectual insight, and touching romanticism that pleases both genders.

3. MANHATTAN, 1979: Although not this author’s personal favorite, many critics feel that Manhattan rivals or even surpasses Annie Hall.  The elegant black and white cinematography certainly dazzles in this all-out tribute to the city of its title, in which a man must choose between a teenage girl and his best friend’s mistress.  Comedy and drama were perhaps never so seamlessly melded. 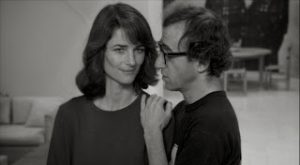 4. STARDUST MEMORIES, 1980: This film was critically trashed on its release, but Allen has since cited it as one of his two or three best films, and we wholeheartedly agree.  This extremely complex, surreal piece of cinema exists in carefully constructed layers that are gradually unfolded, revealing new surprises along the way.  The cinematography and art direction pays direct tribute to Allen’s hero Fellini; while its dense, cerebral framework do not make it an easy starting point to his films, it is ultimately one of the most rewarding.

5. HANNAH AND HER SISTERS, 1986: Although his 12-year relationship to lead actress Mia Farrow would end in scandal, she absolutely shines in this stunning comedy-drama about love, betrayal, and seemingly-impending death.  This is another one that frequently finds itself on all-time best lists, and was Allen’s highest-grossing film at the box office until 2011.

6. BULLETS OVER BROADWAY, 1994: After a somewhat lean period followed by the well-publicized Farrow scandal, Allen returned to form with this period charmer about a struggling scriptwriter who turns to a mobster to help him out with his story.  Dianne Wiest won best supporting actress for her over-the-top Norma Desmond-ish role in this film, just as she had for her much different character in Hannah And Her Sisters. 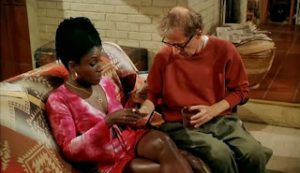 7. DECONSTRUCTING HARRY, 1997: This film is packed with stars including Julia Louis-Dreyfuss, Billy Crystal, Tobey Maguire, and Robin Williams, but it is Allen himself who shines as the lead character–another kooky writer, who finds himself kidnapping his son from his ex-wife and galavanting around with a prostitute.  It’s filled with pointed lines and memorable scenes, although after this film Allen would begin appearing less and less in his movies, preferring to stay in the director’s chair.

8. MATCH POINT, 2005: Following another lean period, Allen returned with a vengeance after he switched locations from his beloved New York City, to London.  This taught, suspenseful, sexy thriller starring a sultry Scarlett Johansson was the result, something completely different from what his audiences had come to expect.  The film performed well at the box office and was seen as revitalizing his career. 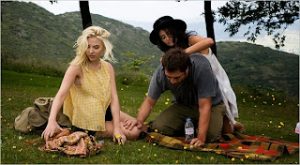 9. VICKY CRISTINA BARCELONA, 2008: The Euro-focused artistic renaissance continued with this film set in the gorgeous Spanish countryside.  Penelope Cruz gave a highly colorful performance that won her accolades, in a story about two sisters who become embroiled with a bohemian, free-living and free-loving artist.  The film’s cutting insights into its unusual menage-a-trois relationship are underpinned by the incredibly lush scenery throughout.  Although it’s only been a few years since its release, this film takes its place right along Allen’s very best. 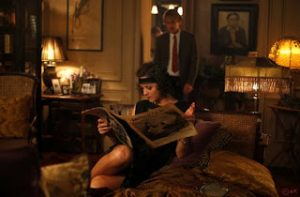 10. MIDNIGHT IN PARIS, 2011: Allen’s extended European vacation continued with Midnight In Paris, which captures all of the ethereal enchantment of the city of its title.  Sure, it received a mountain of critical acclaim, just like all of his other films–the difference this time was that it struck a chord with audiences who went to see it in droves, making it by far the highest-grossing film of his career.  The magic realism of the plot, in which (yet another!) struggling author steps into a taxi and is transported back in time to the Paris of the 1920s where he rubs shoulders with Hemingway, Dali, and Fitzgerald, was more clever and charming than almost any film put out by directors half his age.  We can only hope that the 78-year old makes many more films like these to come–and with last year’s riveting Blue Jasmine, it looks like that’s exactly what he intends to do.  So snuggle up with your loved one, add a wine glass caddy to your home theater seat, and bask in some of the greatest date films of all time.