Last year, we suggested five romantic films to enjoy on Valentine’s Day. Naturally, that did not exhaust the number of fine films available to us, so this year we present you with five more classics, to be enjoyed in a comfortable loveseat with your loved one, lighted candles and a bottle of wine at your side. If you really want to go all-out, try the Madison Refreshment Console sofa, which will turn your seat into a romantic mini-bar with space to chill your drinks–and don’t forget the wine glass caddy! 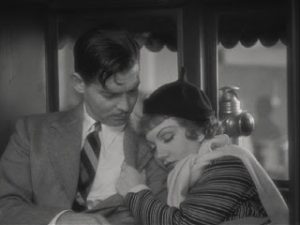 1. IT HAPPENED ONE NIGHT (1934): The Academy Award winner for best picture in 1934, this Frank Capra masterpiece holds up surprisingly well to modern audiences some eighty years on. What’s a perfect movie date night without the legendary stars of old? Claudette Colbert stars as the spoiled heiress who runs away from an arranged marriage, only to bump into Clark Gable, who portrays a hapless newspaper reporter. The film set the pace for all future romantic comedies, as the two stars cross tempers before finally falling for each other. The black and white charm of this timeless classic has the power to effortlessly transport you to a simpler era; if the classic hitchhike scene doesn’t get you, nothing will! 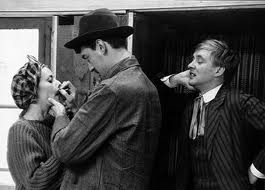 2. JULES AND JIM (1962): There had to be at least one French film on this list, and Francois Truffaut’s powerful meditation on love and friendship remains a peak effort of the French New Wave. This existential drama follows the lives of two men who fall for the same free spirited woman, played brilliantly by Jeanne Moreau. She ends up falling in love with both, but each relationship is doomed. In spite of its bleak premise, the cinematography is astonishing, as it revels in a soft-focus beauty and love of geometric form. This sumptuous, passionate film will be sure to inspire those looking to forge a deep romantic bond. 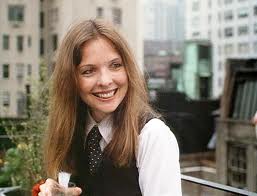 3. ANNIE HALL (1977): The template for all modern-day romantic comedy was kickstarted by legendary comedian Woody Allen, who moved from the slapstick farce of gems like Bananas and Sleeper to this sophisticated portrait of a New York City couple as they fall in love, break up, get back together, and then slowly drift apart once more. The story is told in vivid flashbacks that end up touching on all aspects of life, while remaining hilarious throughout. The deft blend of comedy with more intelligent themes has impressed audiences for nearly four decades, with the film appearing on many all-time best lists. 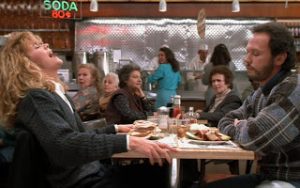 4. WHEN HARRY MET SALLY (1989): What at first seemed like a somewhat fluffy takeoff on Annie Hall soon developed a life and following of its own, and is now seen as a classic in its own right. There is, of course, the now famous restaurant orgasm scene, which boasts one of the greatest comedic performances of the last thirty years. Even better, the film as a whole seems to please both sexes, so it’s an almost surefire bet, even on repeated viewings. You may have seen the film before, but in the context of your decked-out home theater, it will feel brand-new once again: trust us, by the film’s end, you’ll want what Meg Ryan is having. 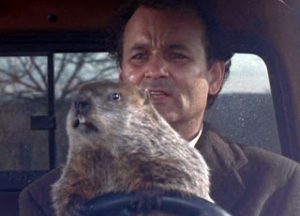 5. GROUNDHOG DAY (1993): This film, which received mildly favorable reviews on initial release, has grown in stature to be hailed as a contemporary masterpiece. That’s because it is built layer upon layer, and these layers are gradually unfolded on repeat viewings. Its feel-good message is not gratuitous or contrived, in spite of the fantasy storyline–somehow, when the film is over, you have grown in wisdom received. And Groundhog Day does all of this while keeping its tone deceptively light and charming, harkening back to the sweetness of an old Hollywood classic like It Happened One Night. In the end, it does what the best romantic comedies are supposed to do–use laughter as the best means to romance.